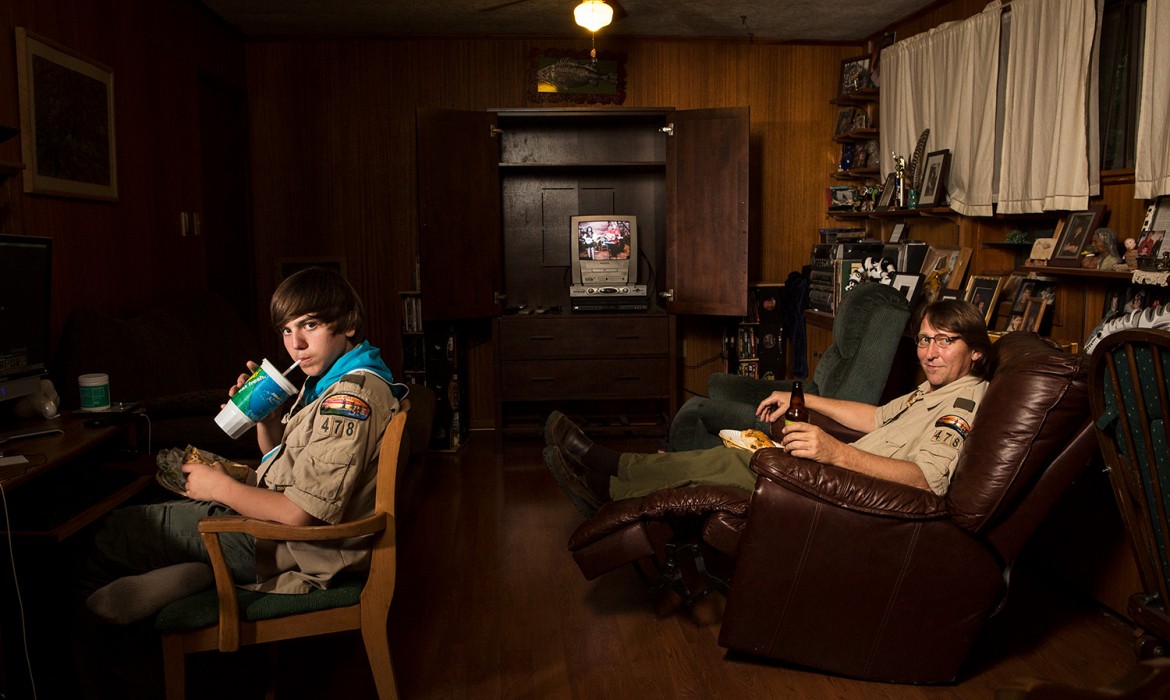 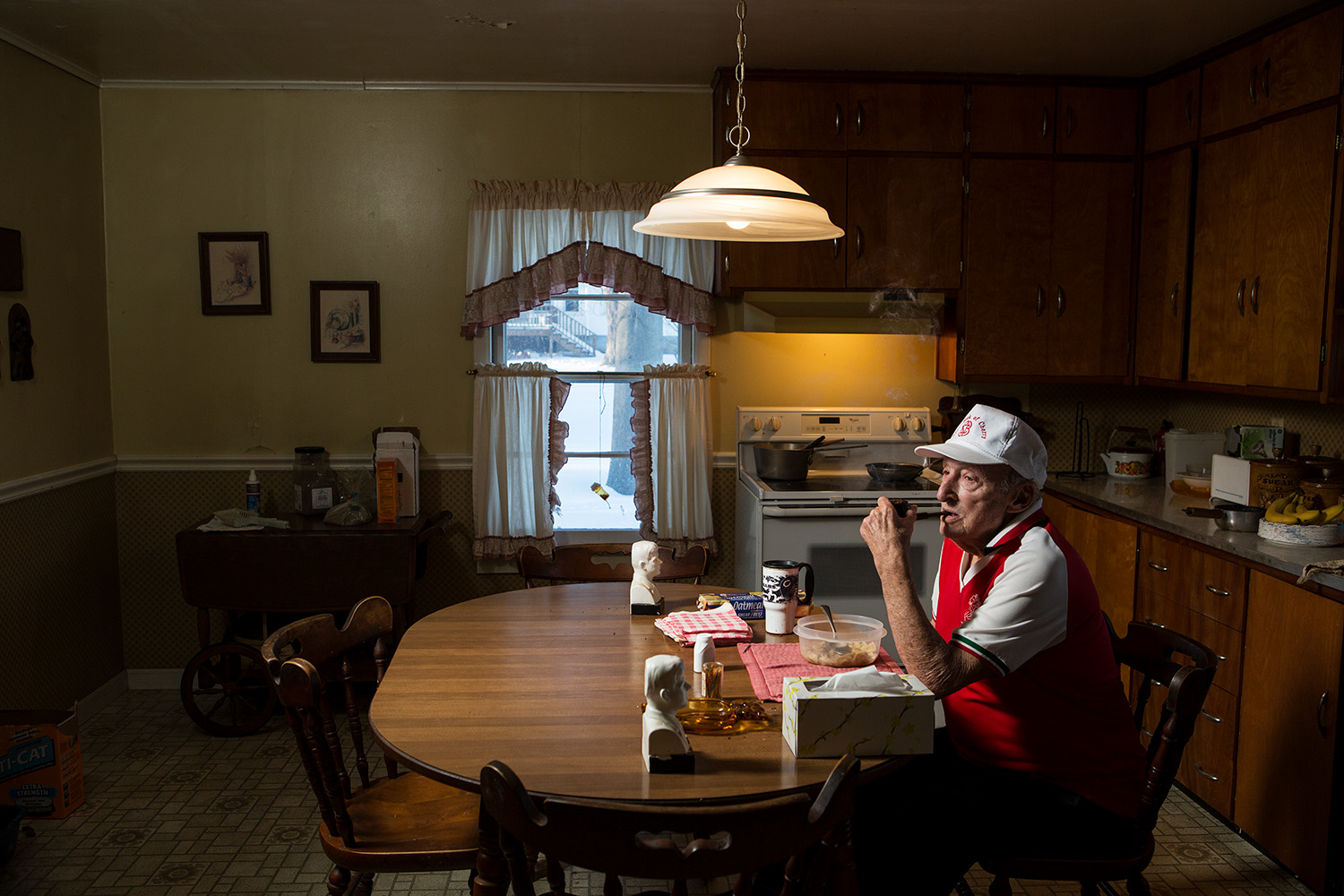 The central motif in my work is the conceptual portrait, specifically portraits that capture the personal connections and human qualities we all share. My goal is to explore common rituals, habits, and spaces that nonetheless reveal individualistic details about our private selves. The focus of Weeknight Dinners is the typical evening meal, when food and space often become secondary to the busy workday. I photographed the portraits Monday through Thursday evenings when time constraints due to work, parenting, and family activities often dictate dinner rituals. There are 78 portraits within the series. I have predominantly photographed in the US and also re-photographed some of the same individuals from an earlier body of work, The Bedroom (2008-2012). In 2015, I spent ten weeks as an artist-in-resident in Bourglinster, Luxembourg where I made 16 dinner portraits of Luxembourg families. 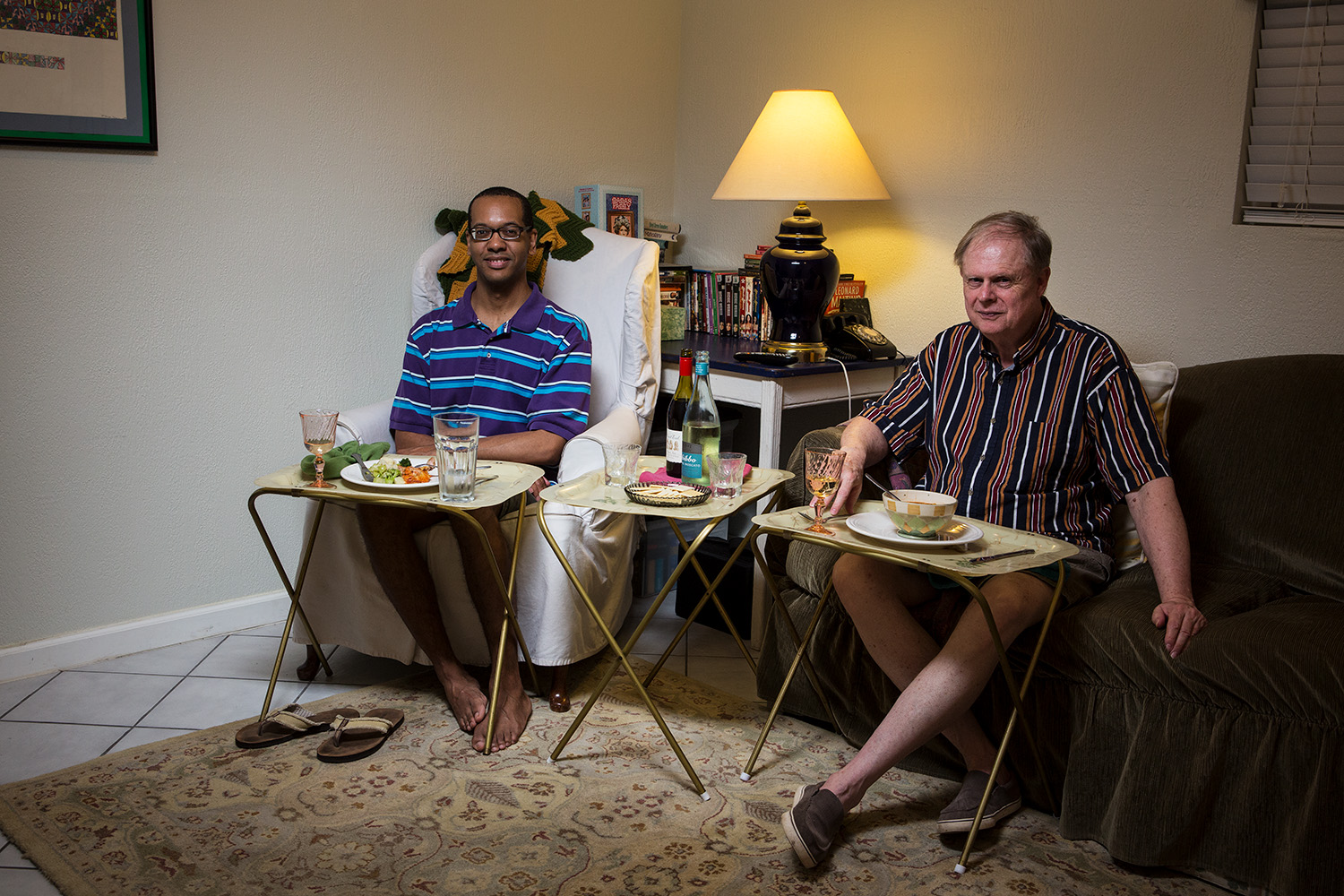 Chris: Tell me a little bit about yourself. Why did you start with photography?

Lois: I’m a series based artist living in Milwaukee, WI. I work predominantly in photography, but also in video, audio and installation. Besides photography, I feel passionate about traveling, swimming, urban gardening, and bicycling adventures with my wife and my 16 year old daughter. I studied photography at Rochester Institute of Technology from 1998-2002. I remember doing photoshoots with my best friend when we were tweens— we’d dress up and perform for the camera and then go smell the shampoo and conditioners while we waited for the photos to be processed at the 1-hour photo portion at Walgreens. In high school I took my first photography course and even though I was mainly an A-student I got my first C! I don’t know if I saw this as some sort of challenge but it some how stuck. At the time the darkroom hooked me– I loved black and white and the magic of chemistry and light. 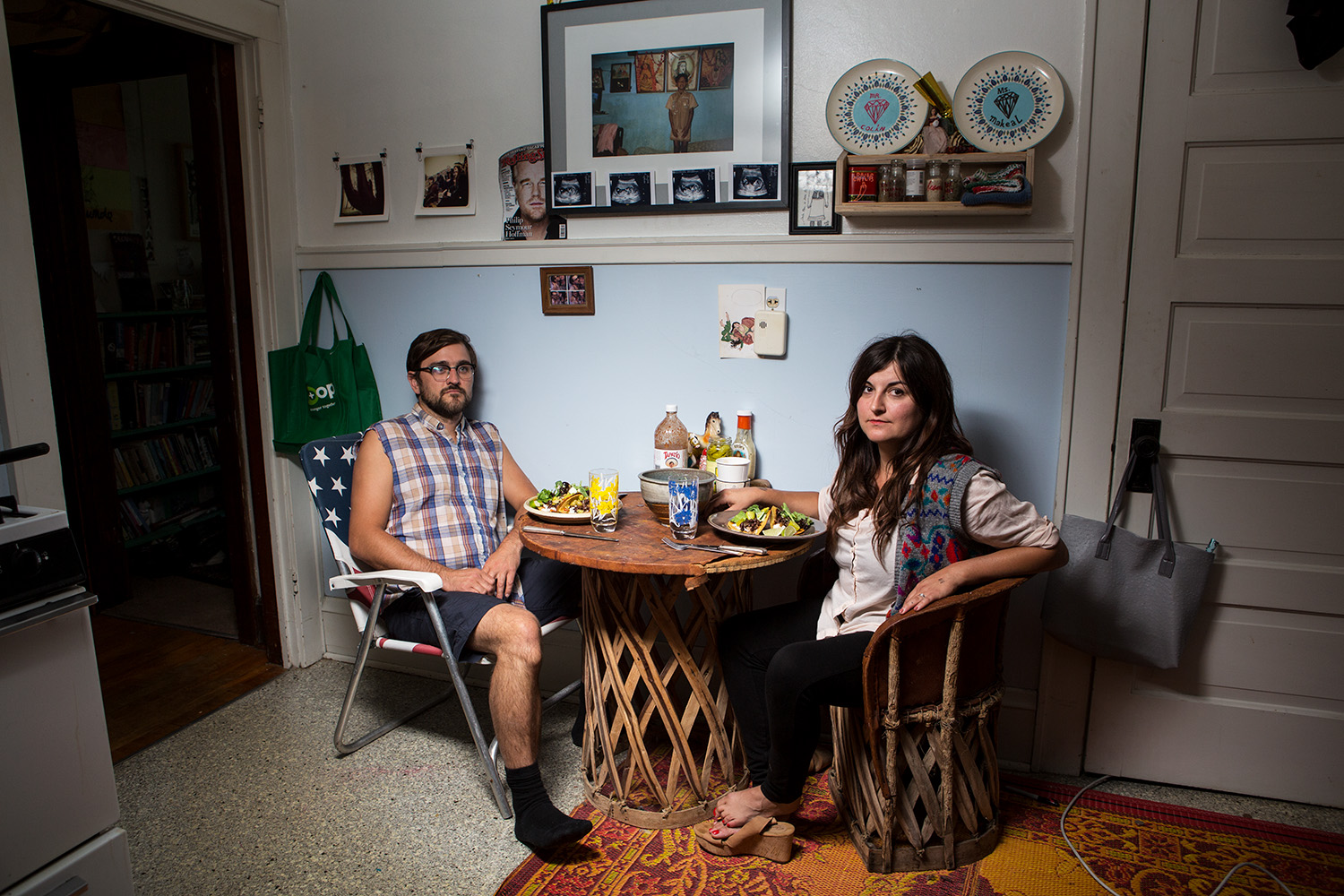 Chris: What I observed about your work is that it mostly is about people and their specific, private environment. What is your interest in these everyday studies?

Lois: People are incredibly complex. Yet on a day-to- day basis, we revert to our habits because it’s easier [face it, we’re cognitive misers]. There is a consistency in our habits and rituals that to a degree define who we are. I am continuously curious about why people do things, what they are doing, where are they doing it, and how. Perhaps it’s because I’m really nosy but it’s also because I’m interested in our immense diversity. What forms behavior and personality? What is the essence of each person?  I have almost exclusively (save for a 10 week residency in Luxembourg) focused on American social studies in my photographic, audio and video endeavors. 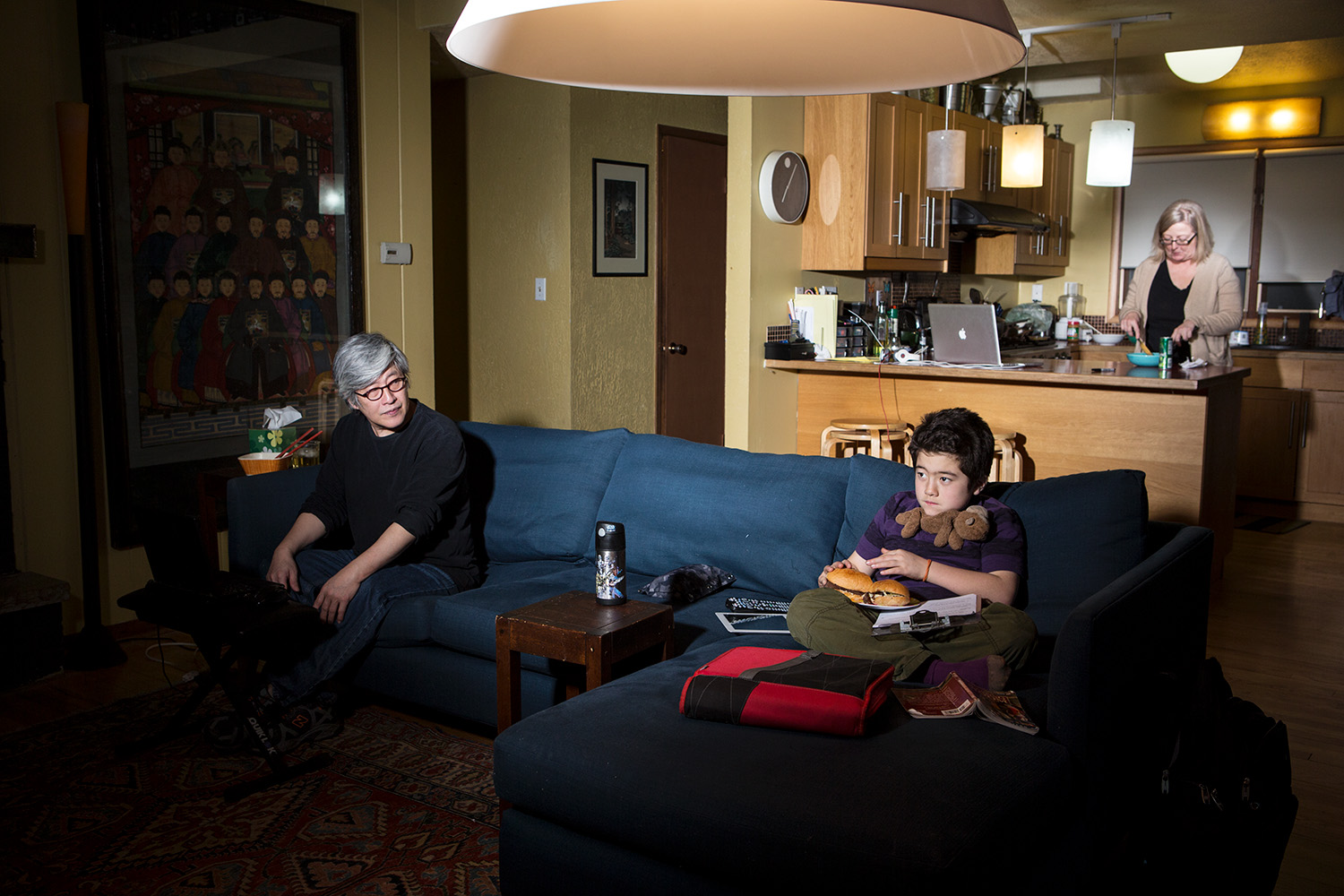 Chris: How did you find the people that took part in your series „Weeknight Dinners“?

Lois: Often when I begin a new series, I reach out to people I know and sometimes whom I’ve photographed for other series (I love seeing different views into the same people’s lives over the span of time and different spaces). I just returned from photographing many of the same people on a road trip down south (Texas, Louisiana, Oklahoma, Arkansas) for the third time in the past 6 years for my series Neighborhood. I have built wonderful relationships with people that I have continued to photograph and I cherish seeing people again, catching up on their lives, and in some cases watching children grow up. I digress! With Weeknight Dinners I photographed both people I knew and strangers. As a project progresses I start photographing strangers which I reach out to in a variety of ways. Sometimes in public I’ll just see someone, other times people will recommend people to me. I have also posted about projects on community forums and bulletin boards – it really depends on the body of work. 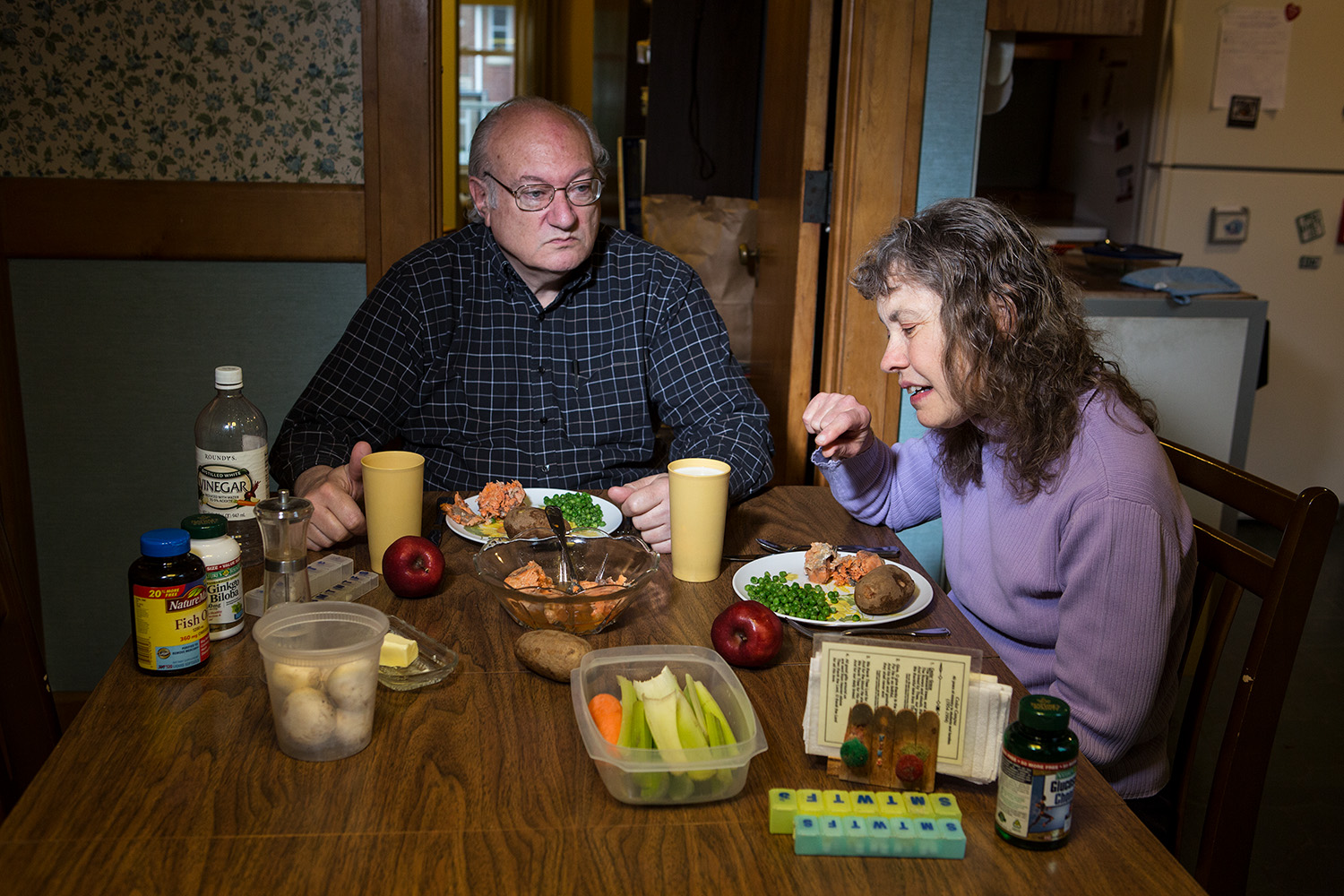 Chris: Did the people have the chance to arrange the dinner settings and their portrayal as they wanted to be viewed, or was it rather a guided series?

Lois: I very much so wanted to photograph whatever someone’s typical evening meal was – so wherever they sat (or stood!) and whatever they normally ate. I’d usually arrive about 30-45 minutes before they’d be ready to eat. They’d show me wherever they have dinner and I would set up my lighting there after I figured out my angle. They would put their food out and I asked to photograph them just as they had sat down (not actually eating). I asked my subjects to prepare whatever they normally would for a weeknight dinner – nothing out of the ordinary. But I can’t control how people want to present themselves and occasionally I’d show up and there would be this elaborate meal with a Cornish game hen and fancy bowls with raspberries in it! But this to me is just as interesting and part of the series – how people want to be seen as opposed to their normal habits. 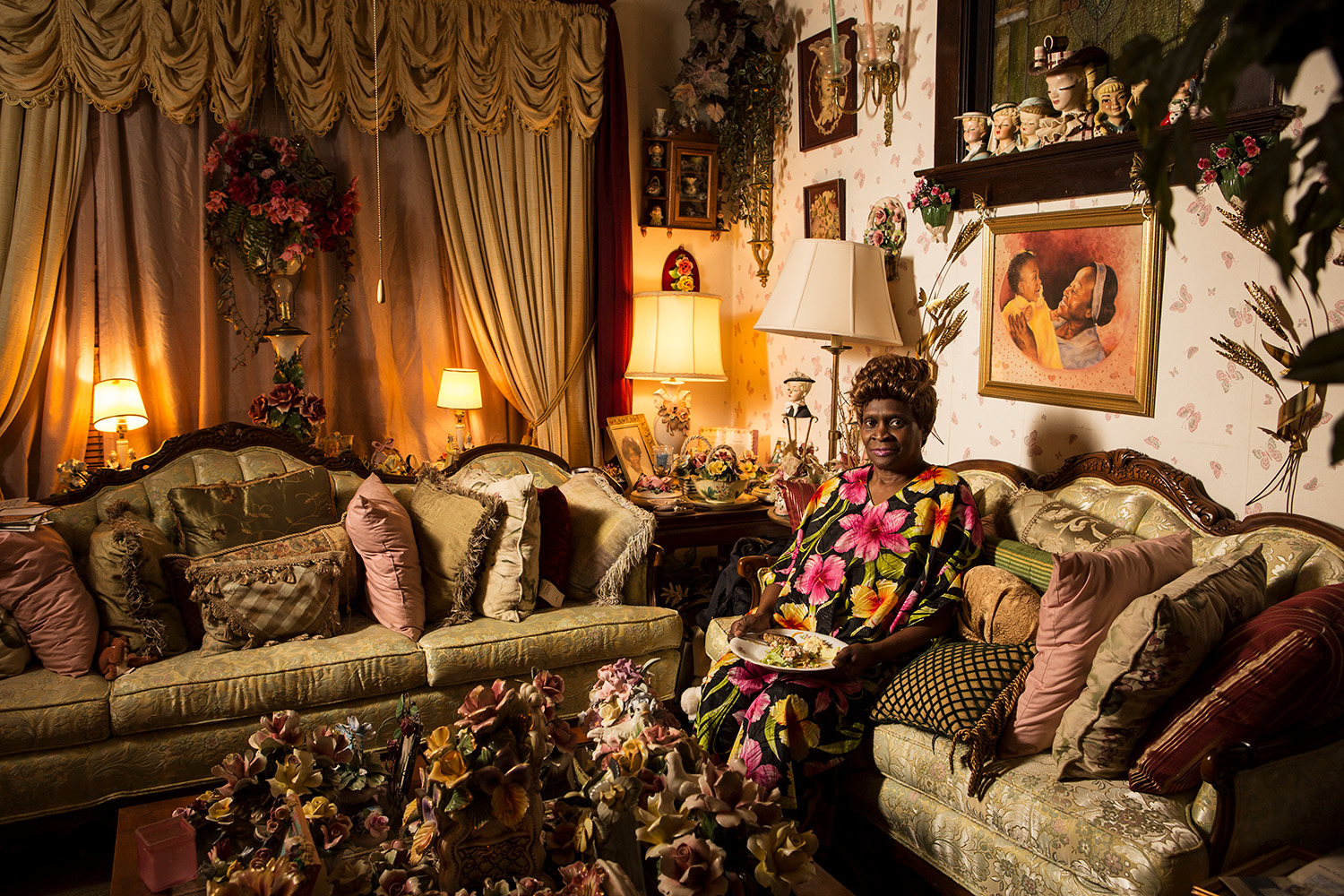 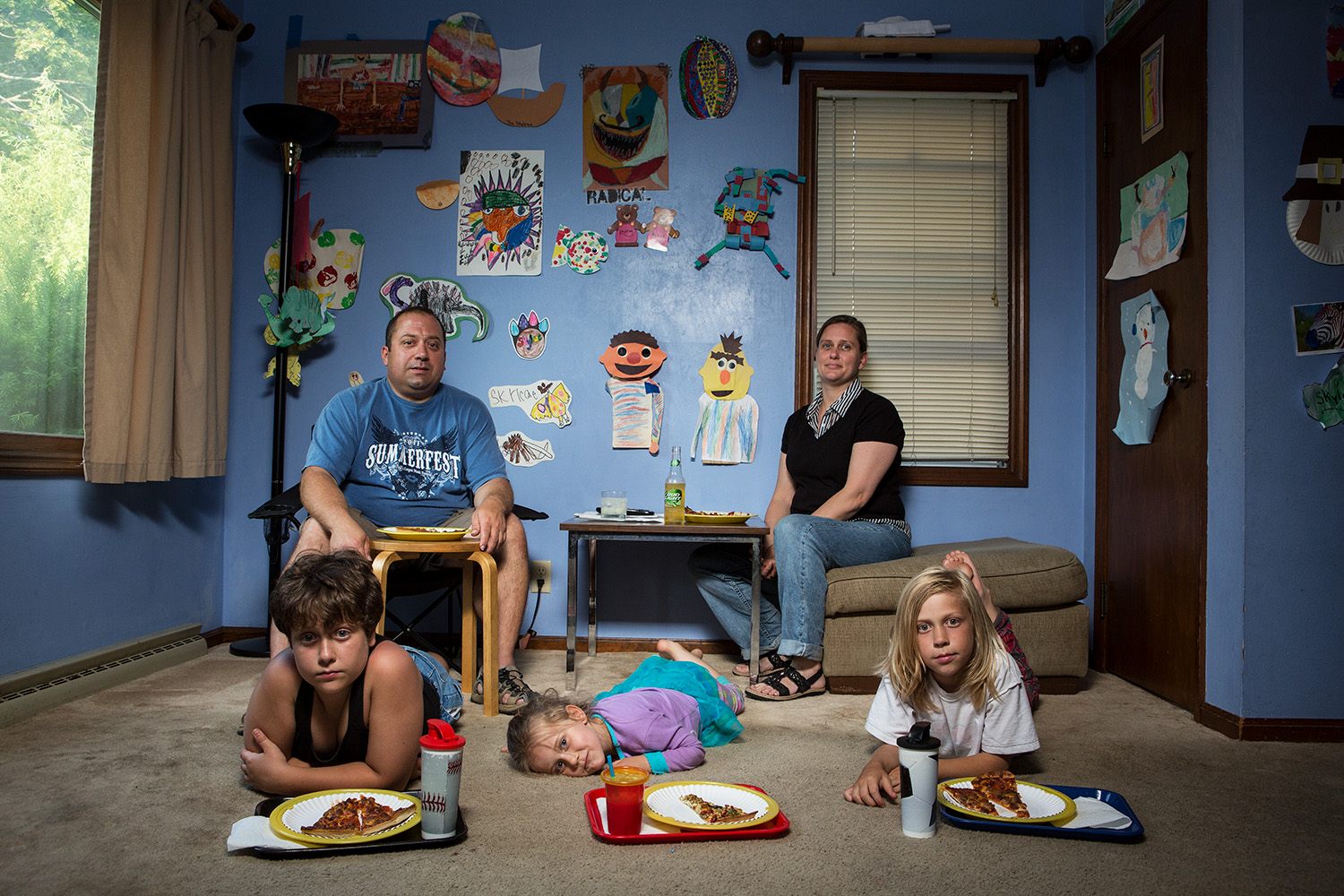 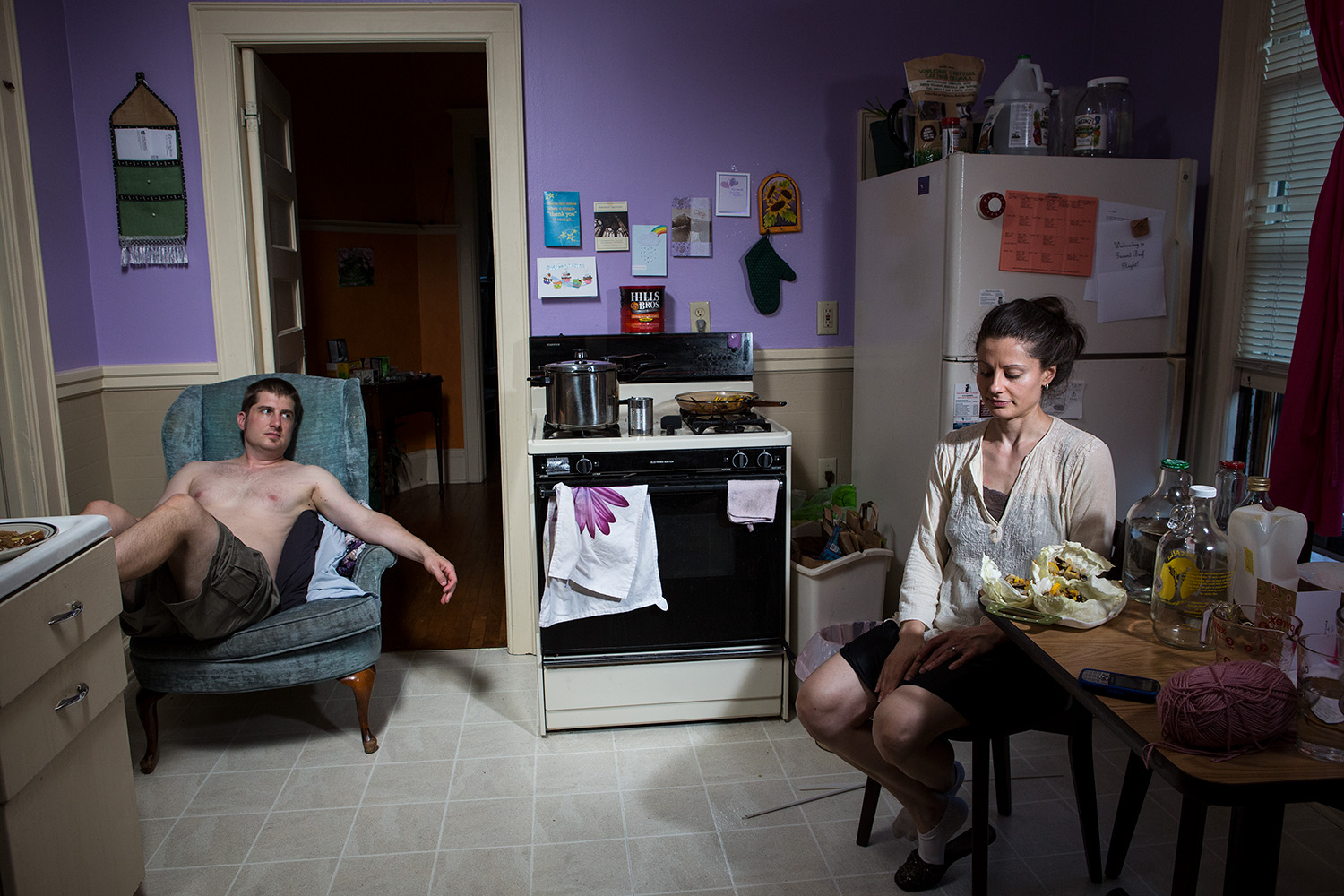 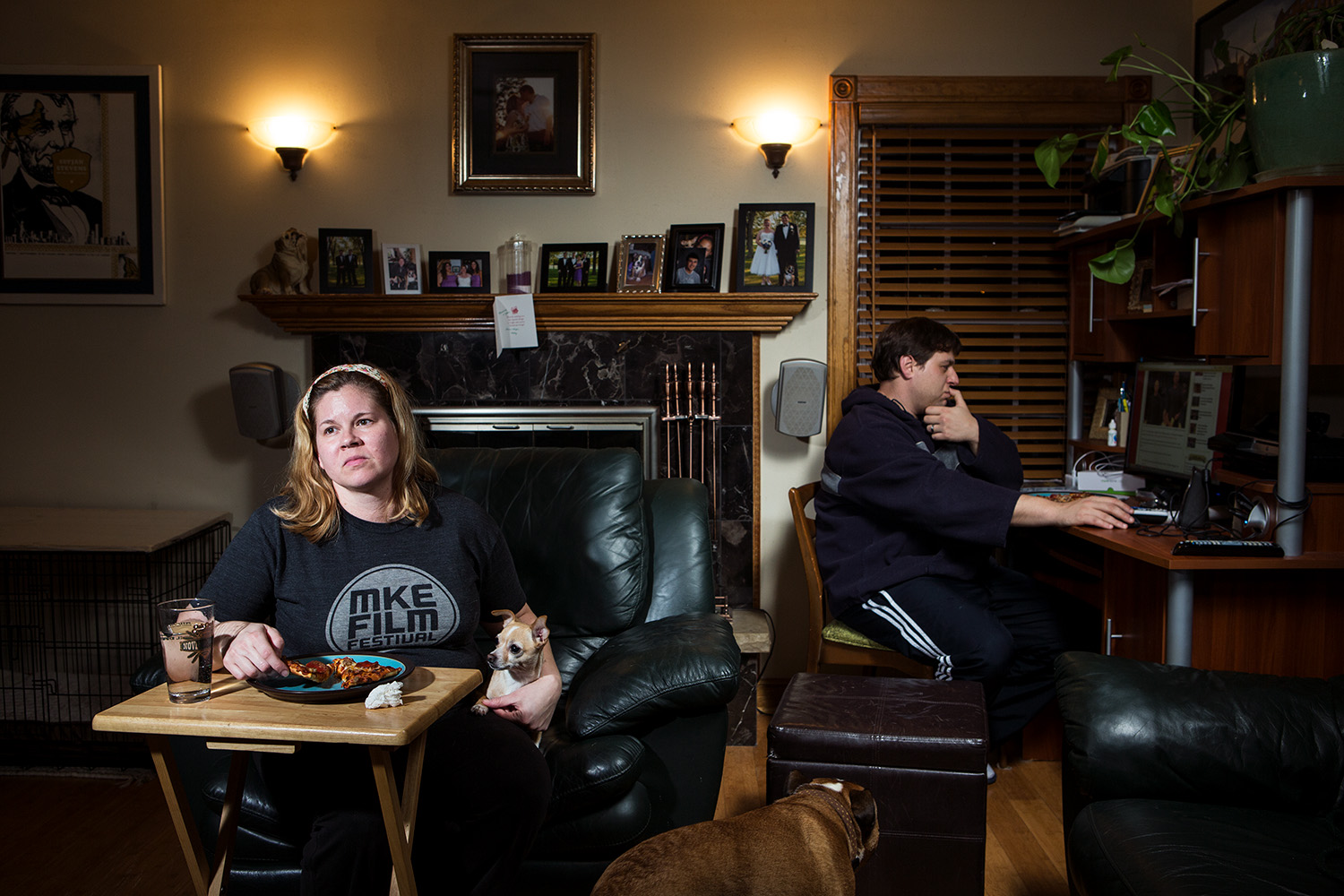 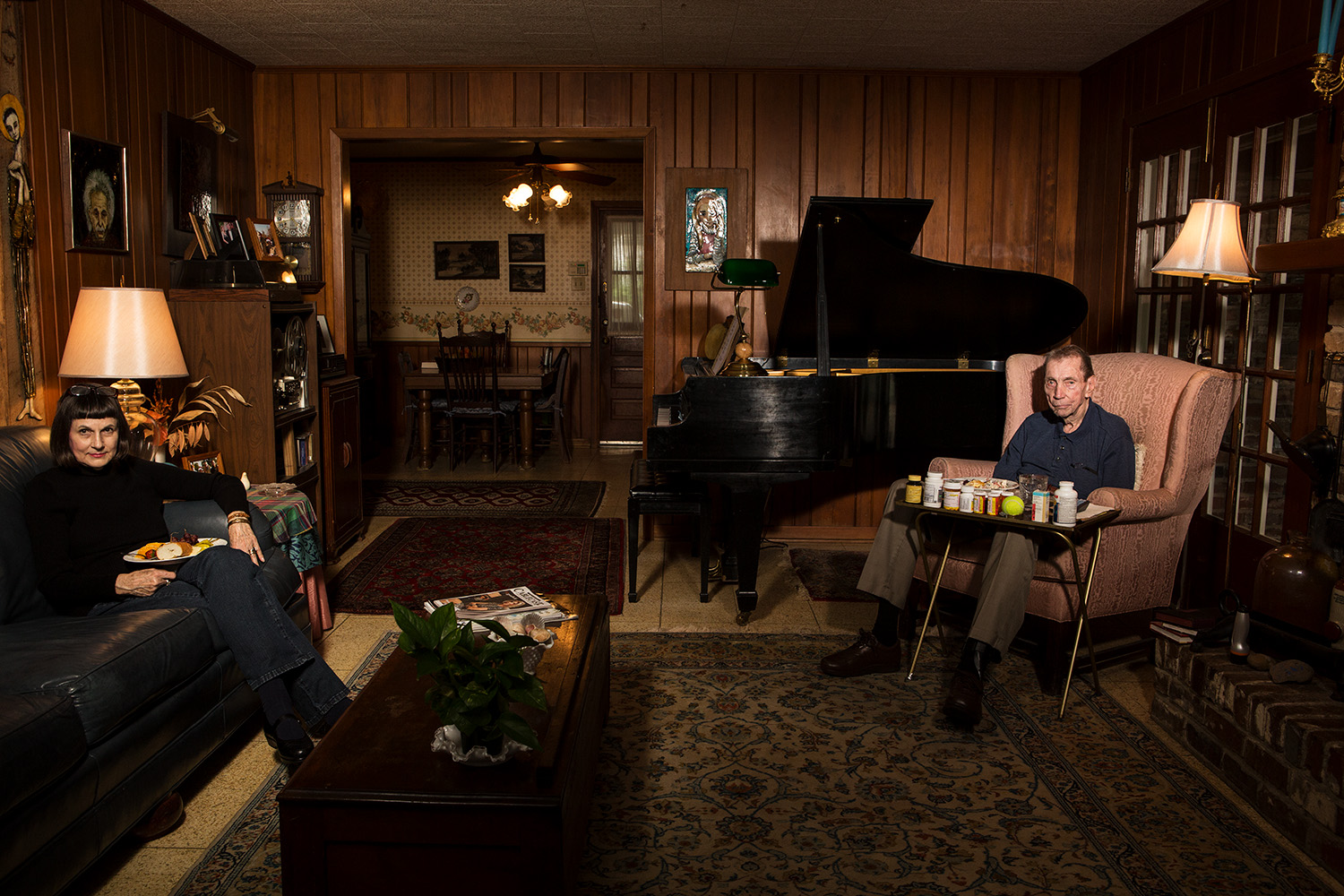 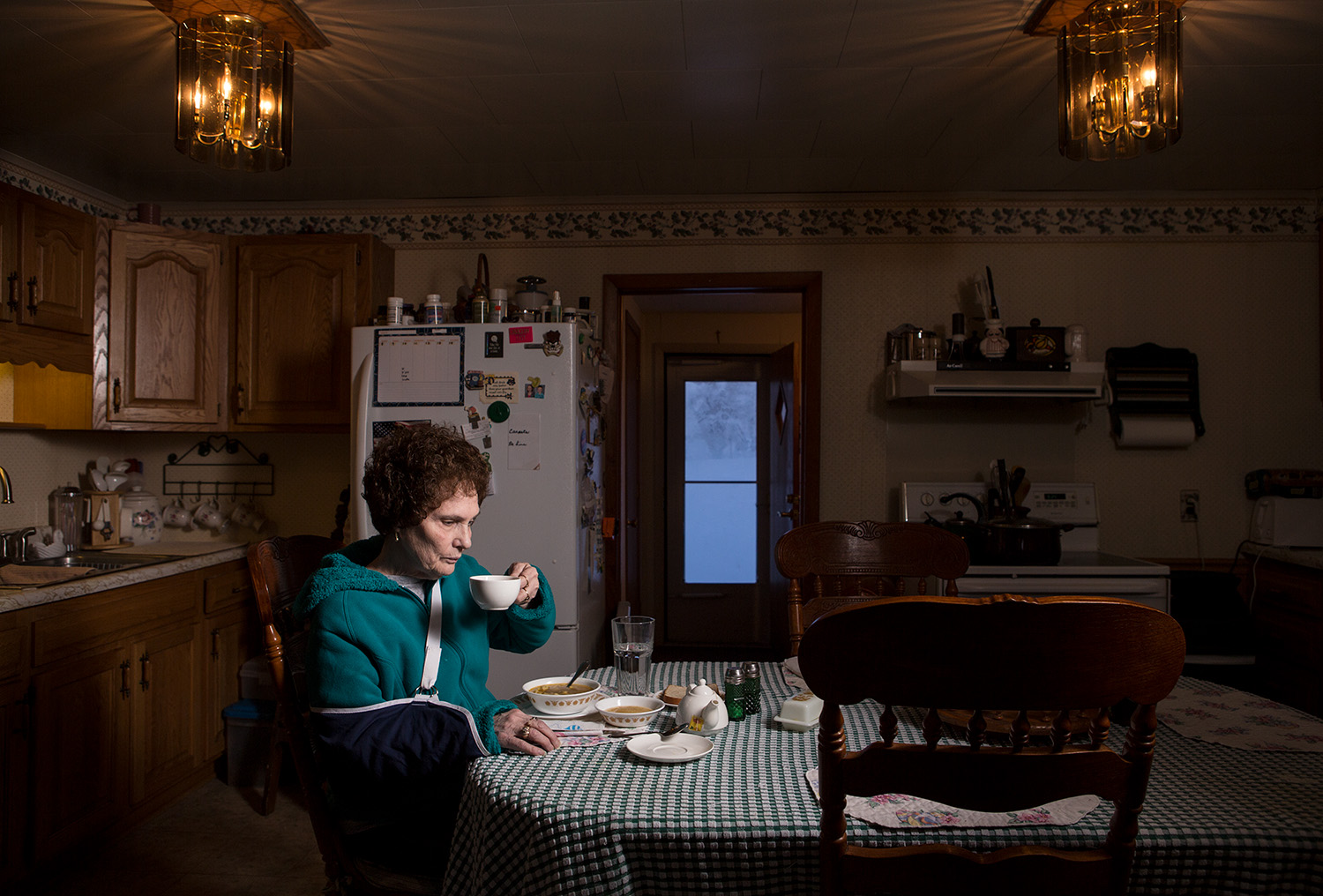 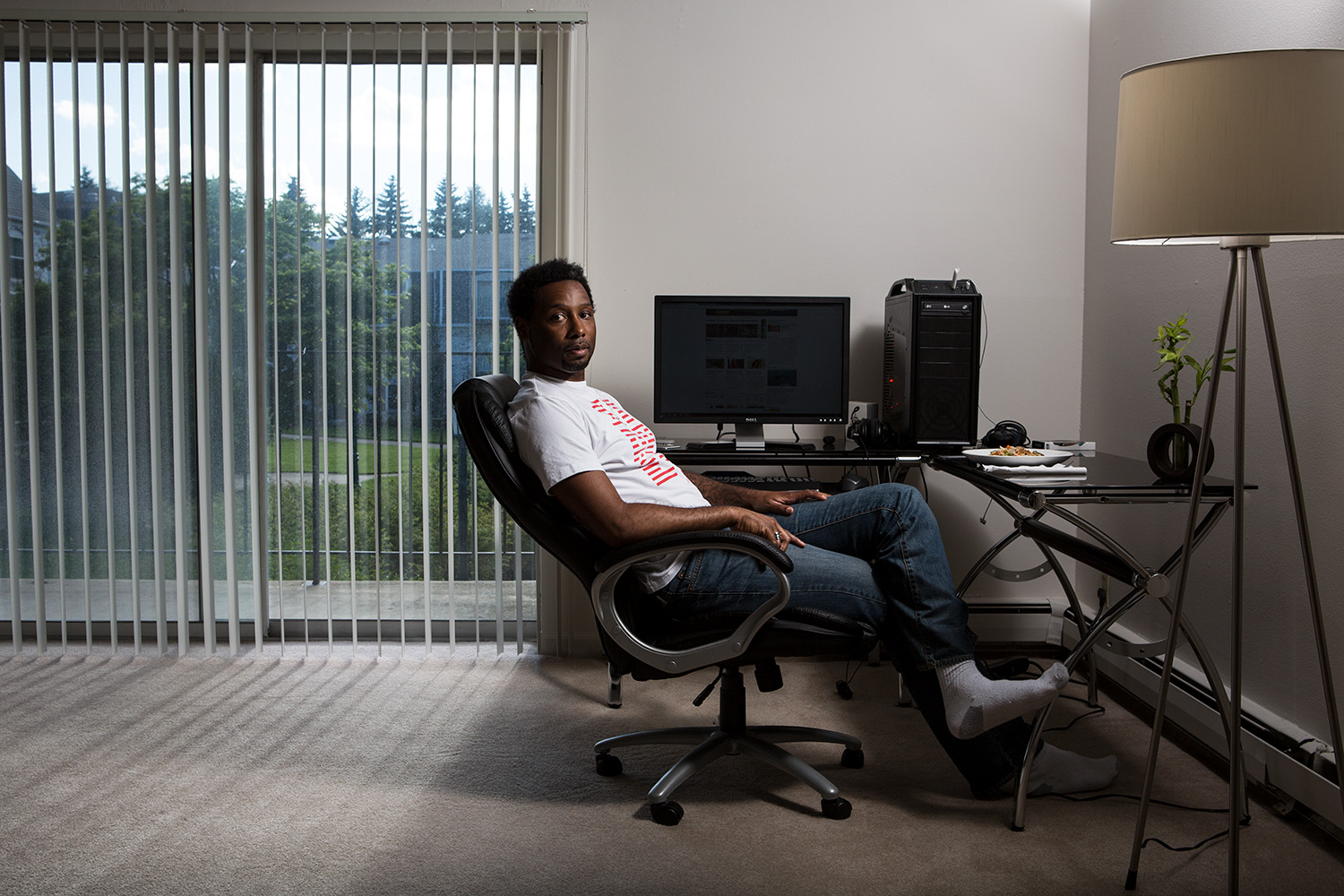 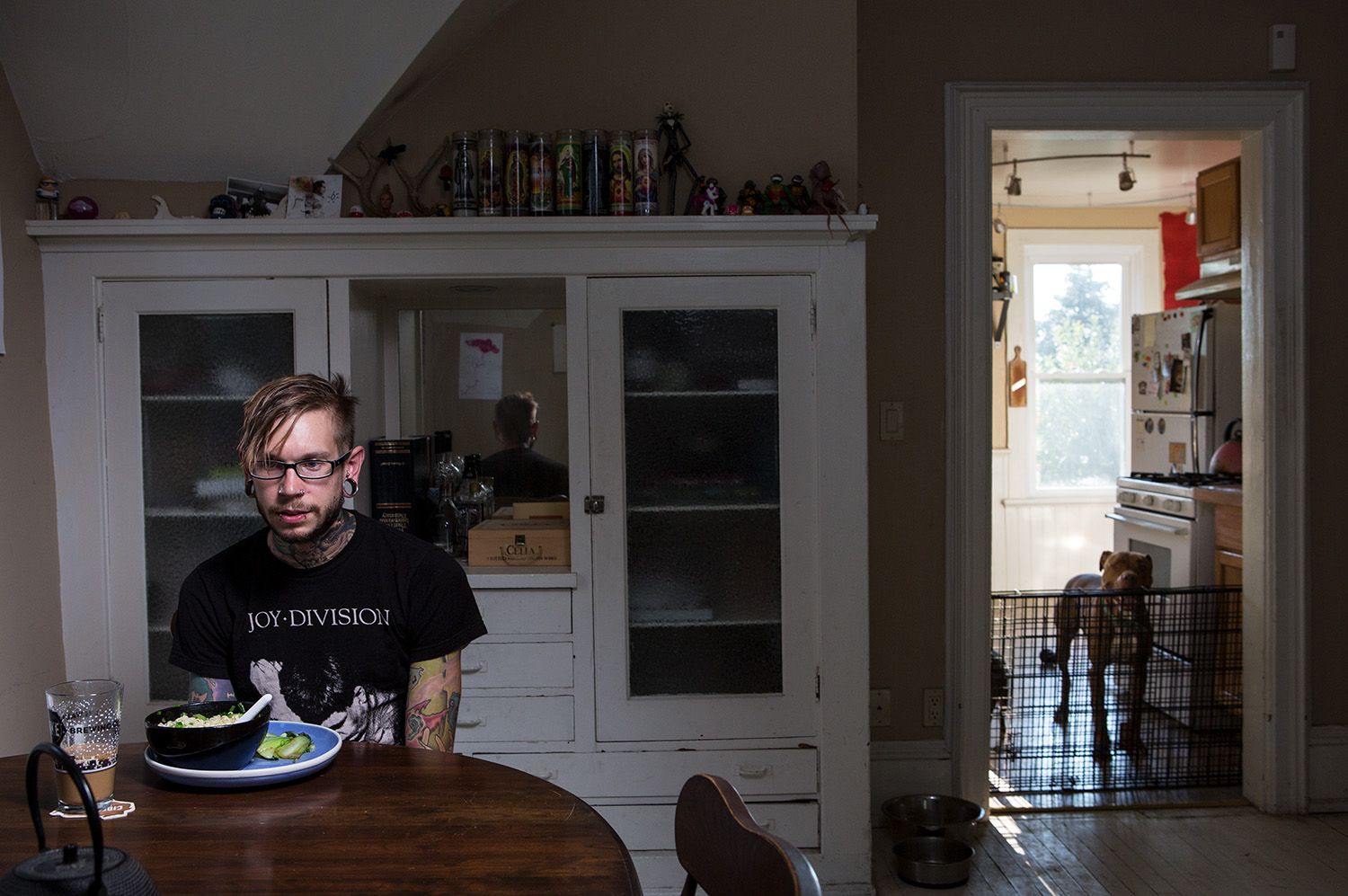 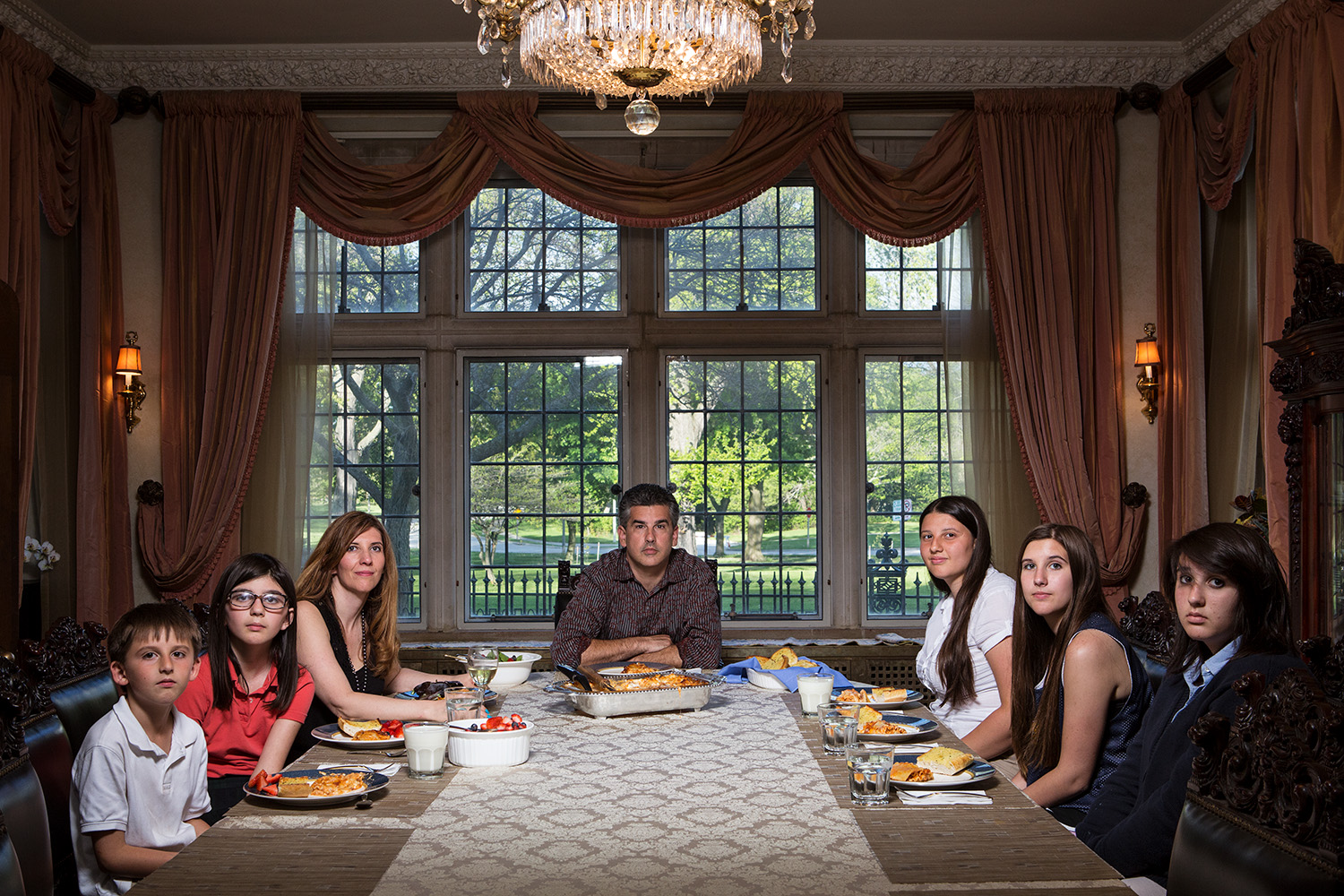